Why Did I Write a Book about my Bereavement by Suicide? – by Jola Malin 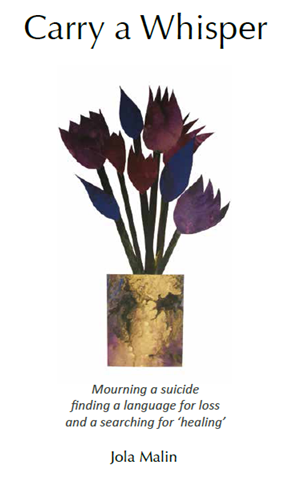 Why Did I Write a Book about my Bereavement by Suicide?

I have been to many funerals. Family or friends whose death was not entirely unexpected. I know how bad grief can be, lonely. It changes you inside. Suicide shoots you.

In 2009 my sister died by suicide – no warning, no signs – it was utterly incomprehensible.

The funeral arrived, and in my eulogy I expressed a strange feeling; we will not be defeated! It felt like war. I didn’t know what I was talking about, 3 weeks after the suicide my trauma was raw.

Several years later I still found myself sometimes suddenly overwhelmed with grief – as strongly as if it happened yesterday. What on earth was happening? I thought I had dealt with the worst of it?! Yes I had, I was still functioning. I was having some kind of ‘emotional flashbacks’. I felt this suicide has blasted a hole in my soul, and it’s not going away. I had been wounded, and like a sort of spiritual surgeon I had to look closely at the injury to work out how to heal it. And I was a ‘war veteran’- this was my 3rd significant suicide bereavement.

I had met my present husband at a Winston’s Wish event for bereaved children. He had been bringing up his son alone, as I had, both of us having lost the partner to suicide. Glad to support each other after the effects of suicide on our parenting, now a step-family we got the boys through their teenage years safely. Then bang another suicide.… my sister. It felt like a bomb hit our home.

I couldn’t talk about it. I had to find a different way of showing how this suicide had wounded me, us, to describe how/why the pain is so acute, yet feels ‘unmentionable’.

I found very little in the book shops or library. That’s what gave me the courage to ‘go public’. I needed to tell ‘the world’ something about this injury and how its gravity defeats normal spoken language.

I practice the arts. Perhaps I’m lucky. Trained as an art therapist in my younger years I knew there is a language other than verbal speech. In 2013 I set up an exhibition in a local gallery, on the theme of grief. It was called 4eva. For the first time in four years I was able to think about my sister Eva’s life – without the utter horror of her death looming in the foreground. I made art. It helped to start a public conversation with visitors about grief.

In my book I use my own art and poetry as examples of my belief that the arts can be used as ways of objectifying thoughts and feelings, i.e. expressing them in a tangible form, like a colour, shape, word, piece of music or sculpture. In that way, relief is found through self-expression and perhaps the incomprehensible takes shape in ways we can begin to share.

I hope my book might enlighten people working in support or healing, about some of the profoundly difficult questions a bereavement by suicide can leave. Written about a longer-term grief, made more complex because it was another suicide – it is not easy reading (perhaps that doesn’t need saying). It is not to be seen as a support book for bereaved people, rather an education/insight for people who need to know how it feels if they wish to help others. It is also my own ‘work of art’…

Author of CARRY A WHISPER; mourning a suicide, finding a language for loss and a searching for ‘healing’.

My book is available to buy from me, a signed copy, for £9 plus postage. Please send me an email; yolazart@hotmail.co.uk.

The book is also available from Stroud Bookshop and from Prinknash Abbey Bookshop.

I am available to give talks, based on my book (allowing for covid guidance re venues).

Who I am as the author of Carry a Whisper

I never saw myself as an expert-by-experience or a vigilant, dedicated, resourceful adventurer. At least not to write that on my CV. I’d been working for several years in hospitality, and always looking for a ‘serious job’, a chance to change the world for the better. By the time I turned 50 I was able to write (never published) a funny book about depression and loss. After all I was an expert-by-experience of loss of all sorts by then.

My little project of funny anecdotes was an antidote to a ‘book’ written two years before, titled Pain. For heaven’s sake, no wonder I never valued my art, my music, poetry. Much of it so morose, so darkly intensely self analytical – I began to suspect my whole life was a form of therapy. A self expression of the pains of birth, of coming into being, of leaving the safety of the womb.

Excited by the idea, the insight that all my efforts were in fact leading to a conclusion, I enrolled in a short course called The Artist’s Way, intending to take myself and my aspirations seriously. At the same time, the boys left home, and at last my time could be focused on my needs and my wish to start a business.

A loss which tore apart every aspiration I had for work out in the world. And drove me back into myself. Persevering with a daily life of bearable normality I pursued whatever I could find in which I could creatively pull back some shattered pieces of myself – a self blown apart by the shock. The third significant suicide in my life.

I wrote a family history book, for the family, about my mother who died the year before. It helped to cement my ancestry before I was able to contemplate how the ancestors might feel about this suicide.

I couldn’t live with the pain stuck inside me. I wrote notes on bits of paper, poetry, drunken rambles. Eventually having produced an art exhibition on the theme of grief, I decided no holds barred. I would write the whole damn story.

I wanted to scream it out, this monstrous personal loss. I began to work on it. Really hard. Deciding that this tragedy could only be released into the public eye if it could be transformed. Into a work of art. It would contain emotional intelligence, academic verve, a good narrative, philosophical questions, and a metaphysical inquiry.

Hence it turned into Carry a Whisper.

In her enlightening book, Jola Malin expresses herself in both words and images but most of all in the admitting of her impotency in the face of suicide. Jola is not one of those for whom expressing her feelings regarding searing loss comes easy and so she has turned to poetry and art as a means of expression which is every bit as powerful as verbal expression. Actually, I would say that it’s probably more powerful in fact. Jola allows the awful truth its silent voice where no glib answers may be heard. I recommend this book to anyone who is looking for some sort of answer to the ‘why’ of suicide but can’t find one. The answer won’t be found in this book either but the silence in which all our big questions reside will.

A Monk at Prinknash Abbey

If the purpose of art is to show us insights into the world, people, feelings and thoughts, then your book is a major artistic achievement.